Well, I finally finished it. A friend who is an avid reader, and more to my point, a socially avid reader, in that she participates in a book group, tells me that she knows a number of people who have not finished it. A number of people. She had told me this before I finished, but I don’t think it spurred me on. Although I do carry some baggage around my multiple failed attempts to finish Gravity’s Rainbow.

I thought I would feel relieved when I finished. Not just because I had been finding it hard to stick with, but also because I was out of renewals at the library and was reading it on ever more costly overdues.

I didn’t feel relieved. I felt disappointed, at first, and actually I felt an expected disappointment. There had come a point in my reading The God of Small Things when I started expecting ultimate disappointment. I lost faith. But then, having finished, I read the laconic author bio on the back sleeve, and “first book” restored my faith. After all, I had enjoyed beautifully conjured settings, lush atmospheres, and an important social commentary. I suspect it will be memorable. My disappointment was only with a payoff that did not match its buildup. (Nor would I want it to. The payoff was fine. It needed less buildup.) A structural thing, really, and that reminds me of the kind of chop that gets honed with practice.

I hope Arundhati Roy will write a second book.

Mostly lists, not many reviews yet, but you might consider that a blessing. 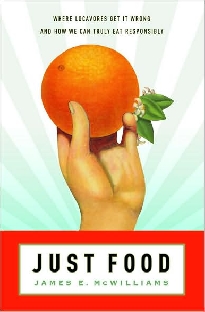 Enjoyed this review of James McWilliams’ Just Food. Reviewer Rebekah Denn gives credit for intelligent, challenging ideas which can be found in the book, but calls McWilliams on the flawed arguments, shallow support for assertions and patronizing tone.

Or, peruse by tag?